In June 2012 we attended the Rio+20 Sustainable Development Summit in Brazil. More than 50,000 people from all around the world who were focused on Sustainable Development Goals attended the Summit. They represented governments, indigenous peoples and organisations from around the world. This gave us the opportunity to engage in dialogue with may people who we would not normally meet in our every day lives and share our views and concerns.

We were able to attend events in both the Peoples Summit and the Government Summit and emphasise the importance of safeguarding the global water cycle as a whole including it into all global sustainability discussions and decision making. We highlighted that mountain glaciers, forests and ecosystems are not merely an important topic for those dwelling in mountainous regions but that they are highly significant for the whole world. We pinpointed the critical role that mountain ecosystems play in the functions of the global water cycle and the regulation of climatic stability worldwide.
During our participation in events at the Government Summit and the Peoples Summit, we worked on communicating this fact as widely as possible and received positive feedback. It was encouraging for us to meet and make links with a wide variety of groups and individuals earnestly working for sustainable development. During our 10 days of attending the Conference we met with Kogi Mamas from Columbia along with BBC film maker Alan Ereira who made the influential and inspiring BBC documentary about the Kogi Mamas ‘Message from the Heart of the World’ in the 90’s. We were able to discuss the importance of safeguarding the global water cycle with them and were invited to attend a film screening of Alan Ereira’s recent film ‘Aluna’.

We also attended some very interesting side events. One that was particularly pertinent and close to our hearts was the side event put on by the Global Alliance for Nature concerning the Rights for Nature. At this event we joined many in signing the Declaration for the Rights of Nature. On the 21st of June we joined a group, led by an Indian Swami, planting a tree for peace within the grounds of the UN Rio Centro complex. Also attending this occasion were a few government officials and a selection of UN delegates. This simple gesture seemed like a positive example that could encourage tree planting to become a normal procedure at future Summits. With the right infrastructure in place, delegates attending such large events could be given the opportunity to plant a tree to mark the event. The positive outcome from the event would thus be much greater and would aid in achieving environmental sustainability. 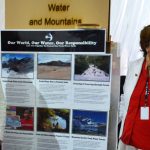 Exhibition in the Mountain Pavilion at Rio+20, 2012Remedy News 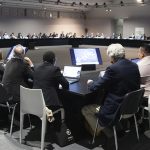